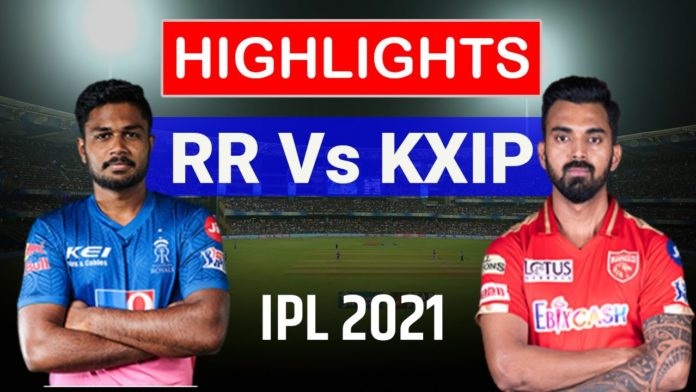 The Indian Premier League continues to give nail-biting matches. In all four matches of the IPL 2021 season, all of them were thrilling and existing. In the fourth of this season, Saju Samson was the first centurion from Double RR’s team. Nevertheless, Punjab Kings edged past them and won this match by a margin of just four runs.

Rajasthan Royals won the toss, and they opted to bowl first. RR got an early wicket in the form of Mayank Agarwal. PBKS started their innings at a brisk pace. But in the second over, they lost Agarwal for 14 runs. Then the skipper KL Rahul and the Universal Boss Chris Gayle blasted the RR bowlers all over Wankhede Stadium.

Both the bowlers batted slowly at the start. They took their time to adjust to this Mumbai wicket. But once they were set, they let any chances let go. RR, on the other hand, had dropped KL Rahul and Chris Gayle. The Double R’s missed to big chances, which proved costly in the end.

the two former RCB players laid a solid foundation from which they took off like a rocket, and that all happened because of Deepak Hooda, who was promoted to number four batting position. He just stoked some amazing shots after the dismissal of Chris Gayle. Stokes finally held on to catch after he dropped Chris Gayle earlier in the match. Gayle was gone for 40 runs.

PBKS team didn’t lose the momentum even after they lost Chris Gayle. It was the partnership between KL Rahul and Deepak Hooda who did the magic for them. Hooda scored his half-century off just 20 balls, while Rahul was looked at the other end. Punjab Kings were just near the 200 run mark. But they lost the momentum, and Deepak Hooda for well made 64 runs.

The Rajasthan Royals bowlers paved their way into the match after picking up Hooda and Pooran in quick succession. The score, which seemed to score reach the 230 or 240 mark, ended on 221 runs after their 20 overs were completed.

Chetan Sakariya bowled a magnificent last over, where he picked up two wickets, and he didn’t give many runs. KL Rahul was out on 91 runs. He played well. If he would have stayed there for four more balls, then the Kings would have reached atleast the 230 mark. Jhye Richarson was the other man dismissed for a duck in the last over.

RR pulled things back after Hooda was dismissed. But till that point, it was a struggle for him. Chetan Sakariya was the pick of the bowlers for Double R’s. He picked up three wickets, and his economy was also under ten. Chris Morris, the most expensive buys in the IPL history, picked up two wickets. But he was expensive in his four overs.

The run chase of triple two runs only panned out well because of the skipper Sanju Samson’s valiant knock of 119 runs. He is the first centurion of the IPL 2021 season. But none of the RR batsmen didn’t even cross the half-century mark in this chase. Jos Buttler’s 25 runs were the second-highest personal score for Rajasthan.

RR’s innings started with the wicket of Ben Stokes, who was dismissed for a golden duck. The Double R’s continued to lose wickets at regular intervals as Jos Buttler, and Riyan Parag didn’t do much after getting starts. Buttler was out for 25 runs, and Parag was dismissed for 23 runs.

It was the greatest knock by an RR batsman played in the IPL for a losing cause. Skipper Sanju Samson played a knock of 119 runs, and he single-handedly took RR to that total of 222 runs. But he didn’t get much support, and he was dismissed on the last ball of the match when RR still required four runs.

Sanju Samson won the man of the match award despite being on the losing side. His knock 119 runs were so good that he deserved this award. Sanju Samson can book his place in the World T20 if he plays knocks like these consistently.