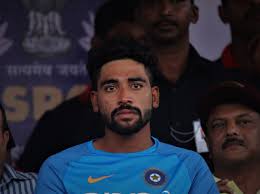 Only 26 years old boy, Mohammad Siraj, in his very debut of Test Cricket on the 26th of December 2020 in Adelaide, took the hearts of his fans by storm when gave out of the box performance. The fluctuations in his show have many variations but his popularity increased by leaps and bounds as he took his 5-wicket haul on day 4 of 4th Test Match between India and Australia and noticeably going through many sufferings he overcome every one of them and has gained loads of fanbase all around the globe.

The very first thing Mohammad Siraj did after landing in India was, he went straight to the graveyard to tell his father that his dream of playing for India at an International level has completed. He paid homage to his father and took his blessings and said in an interview that he also talked to him. After offering flowers and worship to his father he went to his home where everyone was eagerly waiting for him as he was far from home for about 6 or 7 months.

In an interview at his house Mohammad Siraj when asked to confirm what his brother told the news channel whether Virat Kohli is his Hero, he replied indeed, he is his Hero and more than that Virat is the one who backed him when he was not able to give his best in the 2018 IPL, Kohli comforted him, saying everything would be fine, along with Virat the whole RCB team showed faith in him and was with him at hard times. That is something unforgettable for Siraj and for which he will always be indebted to them.

No proof is needed to tell that Mohammad Siraj has stood well up to the hopes and expectations of the team members and the nation, rather than this we should say that he has performed extraordinarily in the Test Series. He was the one who contributed perhaps the most in bringing the opponent Aussies under pressure while it can not be denied that every player is the deserver of applaud and wishes to make the Indian Team winner.

Will carry on the belief!

He also revealed that he was that much mentally strong to ignore what abuses were done with him on the field and concentrate on the game. He added that he is proud to play for India and wants to play even more gracefully for India in the upcoming Test series with England. At last, when the reporter asked that what is that he wants more from now on, his reply would melt your heart, he said nothing more he yearns other than being a down-to-earth human.

What virtues do you want to take from this young cricketer? Share with us!