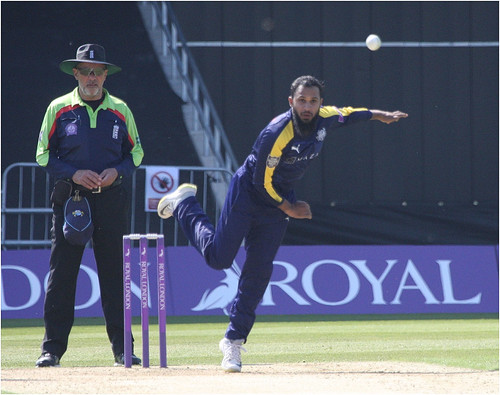 When the 14th edition of the Indian Premier League was postponed for more than four months, it was inevitable that many of the existing squads would be subject to change. The overseas rosters are especially vulnerable with the majority of Australian players staying away due to other commitments.

Others are getting in some valuable practise ahead of the T20 World Cup which follows the IPL almost immediately. Reinforcements from England and New Zealand are coming on board and Indian fans have some exciting new talent to look forward to.

Among those call ups are two English bowlers at opposite ends of their playing careers.

Most cricket followers in England are surprised that Adil Rashid has had to wait so long for his first IPL call up. He’s widely regarded as the best leg spinner in the country and he now has a belated chance to show his talents in the greatest T20 domestic tournament of all.

Rashid has been selected by Punjab Kings who have also moved to sign Australian paceman Nathan Ellis. The two men will replace Jhye Richardson and Riley Meredith who have withdrawn.

Punjab need Rashid to fire and to turn in the type of performances that he’s been delivering for England at international level. After eight games of the group stages, Kings had won just three and they currently sit in sixth place in the table with just six points.

Group points have been carried over from the first portion of the tournament which ended on May 2nd. As a result, Punjab Kings will need to win at least four of their remaining six games if they are to stand any chance of making it through to the group stages.

It’s a tough task but Rashid, with nearly 300 international wickets behind him, is a man who can win games from unlikely positions. He’s useful with the bat too and has made an impressive 10 centuries in first class cricket.

RCB have also suffered from withdrawals from their original squad. Adam Zampa and Kane Richardson are among those who have elected not to return and England’s George Garton is the man to directly replace the pace of Richardson.

Garton is a left armer who impressed at under 19 international level before picking up a freak injury that halted his early charge. He’s 24 now and has yet to make his full England debut but would surely have played against Pakistan this summer, had it not been for Covid issues within the squad.

Like Rashid, Garton can score useful runs down the order and he’s also a brilliant fielder. Royal Challengers look to be getting the full package and it’s hoped that he gets a chance to play as he joins the Bangalore camp.

Garton signed for RCB as back up to a side who look set to go deep into the tournament.

Royal Challengers Bangalore sat in third place in the table when the IPL was paused at the start of May. Virat Kolhi’s men are expected to progress and Indian betting sites affiliated with sbo.net have RCB as one of the favourites to win the trophy at the end of the campaign.

In contrast, Punjab Kings are an outside bet but that could change if they start winning when the competition resumes. The markets can be very fluid and sbo.net will reflect any changes through that panel of betting companies.

There’s more than just a set of odds here and readers can also take in news and opinion pieces on the IPL and on cricket in general. From the panel of sportsbooks, those readers also have the opportunity to register and take advantage of some generous sign up promotions.

Lastly, with funding options, fast customer service and a choice of cricket markets, the website completes the full betting package.

Bangalore have yet to win the Indian Premier League but many feel this could be their year. George Garton’s pace and all round skills could be the factor that gets them over the line. Punjab Kings are less likely to challenge but the addition of Adil Rashid may just make them a more potent force in the latter group stages.

Linebet app: what you need to know about it in 2022

What Can We Expect From The T20 World Cup?